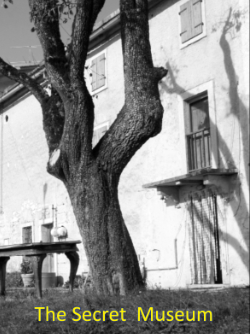 In the summer of 1999, St. Francis of the Church of the Exquisite Panic withdrew to the wooded slopes between Vajo dell’Anguilla and Vajo dei Falconi (the valleys of the eel and the falcons) for one of his habitual retreats in silence and meditation.

In the course of his stay he asked himself how best he might with all his being take part in the Passion of Art, and in its mystery of love and suffering.
In the course of his itinerant meditation, the solution appeared before him in the form of a modest country cottage which he found to be imbued with a spirit of beauty, completeness and natural harmony that he felt to be the seal of his calling.

Francesco was thus enabled to found in that hermitage the personal and secret museum he had so much and so long desired, and to shape it in the light of that image of absolute utopia for which his heart and life had so deeply and so dearly yearned.

It’s to be hoped that pious spirits will not be shocked by the comparison drawn between the creation of Francesco Conz’s Secret Casamuseo and the founding of the hermitage at St. Francis of Assisi’s Sanc- tuary of La Verna. A hermitage is a place of arduous access where one or more individuals can voluntarily withdraw from the concerns of the secular world in order to lead a life of prayer and asceticism, and no other terms suffice if we’re truly to understand the extraordinary story of the founding of the Secret Casamuseo. The living of a life of austerity, the perception of such a choice as a virtue, and the constant search for a dimension of greater spirituality, even if in terms of a secular culture of art, are all to be seen as essential elements of the life lived, and the options pursued, by this proud possessor from the Veneto. Francesco Conz is likewise in no way a stranger to the thought that the numerous restrictions he has imposed upon himself can have led him to a greater freedom in many spheres of life, no less than to a greater capacity for clarity of thought.
His absolute and unbinding faith in the aesthetic principles which he in fact pursues has often led Francesco Conz to exclude himself from the major circuits of the art world, no less than to a number of clamorous disputes with museum directors, critics, artists, and other personalities who populate the world of art for reasons entirely of self-celebration.

The founding of his own private museum has, to a certain degree, pacified his hope of seeing his collection housed in an institution en- tirely dedicated to it.
What motivates Francesco Conz is surely not ambition alone, which is something that he shares with all collectors. As amply argued in the essay by Sandro Ricaldone, the fundamental reference points for Francesco Conz are to be found in the ideas of thinkers such and Emerson and Thoreau, who saw a life of retirement in a place as close as possible to nature as the source of salvation form the corruption put in act by society. Their concept., indeed, was not very far from the notion of ascetic isolation to which we referred at the start. Moreover, religion is present at a number of levels in the notion of art that Francesco Conz has developed. It’s hardly by chance that he speaks of his “conversion on the road to Damascus” when he talks about those first encounters with Fluxus and Actionism which were to lead him to a radical revision of the aesthetic notions. It’s likewise not by chance that Francesco Conz constantly compares the artists with whom he’s involve to the saints of a secular church of art. In this context, one must also ascribe a new and highly important value to the enormous fetish collection which is partly housed in the Secret Casamuseo, and which essentially consists of the remains of performances, or artists’ shoes and articles of clothing, of materials used for the realization of editions. All of these discarded objects, once collected, have been painstakingly subjected to a minutiose operation of cataloguing and authentication which has produced a series of documents which have all been duly stamped or signed by the artists involved in the making of them. Substantially they have been subjected to a true and proper process of recognizance that effectively transforms them into relics.

The practice of performance on the part of the neo-avantgardes has produced a moment of rupture and profound crisis in the art system. the fact that what remains, the discard produced during a performance, cannot alone support the aesthetic discourse brought into play by the artist has not escaped Francesco Conz, who has given himself, heart and soul, throughout his life to the task of healing that wound. Whereas a traditional work of art, a painting, a sculpture, can be enjoyed as a thing in itself, or can be understood to make manifest an intrinsic formal aesthetic value, the reliquary object has need of a system of sanctification.

The relic (the fetish) is frequently useless, ugly, and sometimes even obscene (as is also true of a large part of religious relics) and cannot autonomously account for the complexity of the aesthetic concept expressed in a performance. A vast production of theory is necessary. The object per se cannot be a work of art without the support of the rigorous construction of a system of knowledge.

The Secret Museum, from this point of view, can therefore be read as a great work of exegesis that gives a home to all the movements collected by Francesco Conz, exploring their connections, seeking out their sources, and thus revealing the profound pedagogical impulse that lies beneath the very idea of the creation of the Secret Museum.