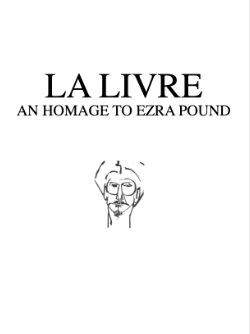 This homage to Ezra Pound was initiated in 1987 on the basis of a project suggested to Mary de Rachewiltz, the poet’s daughter, by Francesco Conz, and it ranks as the most important publication yet to be produced by Archivio Conz. In the course of the last twenty years, it has seen the participation of fifty-eight artists of international repute from all the principal movements of experimental avantgarde poetry, and each of them has rendered an act of homage to Ezra Pound, in the form of a series of original works, from three to fifteen in number. Each of these works has been executed on a sheet of cardboard of the standard size of 24.5 by 35cm, and each of the series to which they belong assumes the form of one or a number of artists’ books.

The project began with the organization of the first of what were finally to amount to seven workshops at Brunnenburg Castle—the home of the de Rachewiltz family—where Pound, starting in 1958, spent much of the final part of his life. These workshops now present themselves as veritable historical events that permitted many of the twentieth century’s most important experimental poets to work together in rooms once inhabited by Pound himself, and all on a single theme. To mention but a few, we recall the work- shop of 1989, in which the concrete poets took part: Ilse Garnier, Emmett Williams, Eugen Gomringer, Gerhard Rühm and Heinz Gappmayr. Or, again, there was the work- shop of 1991, which hosted three of the members of Brazil’s Noigandres group: Augusto and Haroldo De Campos, and Decio Pignatari. After the notion of further workshops was abandoned in 1993, the project continued to develop by way of invitations extend- ed by Francesco Conz to individual authors whom he felt should be involved in it. This tactic made it possible to avail the project of contributions from poets whom otherwise it would have been difficult to gather together into workshops, as in the case, for example, of the poets from Japan.

The original plan for a series of workshops was curtailed for financial reasons, but re- mains nonetheless the motive force of the whole initiative. The “La Livre” workshops, indeed, bear witness to of one of the fundamental characteristics of Archive Conz. These workshops developed and rendered explicit a number of the subterranean links that have always guided the choices which Francesco Conz has made for the construction of his collection, and which give it a unity and self-consistency that goes well beyond the principle, no matter how important, of “inter-media.” They imply, supply or point in the direction of inter-relationships among nearly all the movements of which Archive Conz has collected the works. They testify as well to that desire for constant, deeply felt, and always productive dialog which has made Francesco Conz an impresario of encounters and events, and a true and proper catalyst that can trigger and solidify relationships be- tween the many different movements that constitute the avantgarde. We discover the Archive’s most conspicuous characteristic—and see it clearly to be embodied in the “La Livre” project—when we note that Francesco Conz finds less satisfaction in collecting works of art, than in making them possible.

Ezra Pound stands, quite properly, at the center of this project. His mark on literature throughout the world includes the mark he left on the development of experimental po- etry. One remembers in particular that his “Cantos” were among the very first texts in the western world to effect a rendezvous between poetry and the power of the ideogram. “La Livre,” however, proceeds to a more detailed reconnaissance of Pound’s influence, both direct and indirect, on the avantgardes of the second half of the twentieth century, and as an act of homage the project has enjoyed the spontaneous and grateful adhesion of artists from the widest variety of tendencies and backgrounds, in stark and creative contrast to the iniquitous treatment the poet received in the wake of the stance he took in opposition to the United States’ participation in the Second World War.